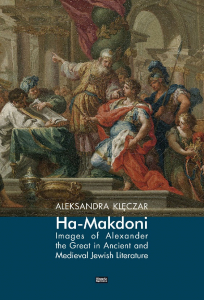 Ha-Makedoni. Images of Alexander the Great in Ancient and Medieval Jewish Literature

Alexander the Great is an unecpected yet important hero of a number of ancient and medieval Jewish narratives. He appears in historical works, prophecies, moralizing parables and in a number of fantastic stories retelling his life and deeds. These legends were in circulation very early on: the earliest written accounts on Alexander in Jewish tradition are older than the ones preserved from the Greco-Roman world. This book is devoted to the analysis of the image of Alexander in Jewish literature. By tracin his image as an exemplary foreign king, a leader chosen by God,  an object of moral critique and a traveller in far, imagined lands we can shed some light on a number of interesting features of Jewish-Graeco-Roman cultural exchange. The book should be of interest for those studying Jewish culture and classical reception as well as scholars dealing with the development of the legendary image of Alexander the Great.